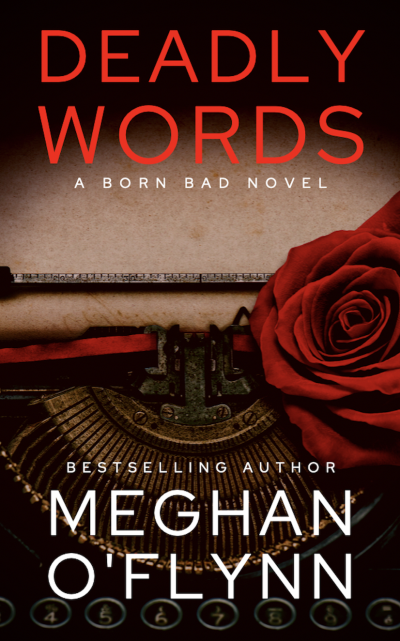 “Brilliant, dark, and impossible to put down. O’Flynn masterfully crafts a twisted tale of buried secrets in Deadly Words. Poppy is unforgettable—unlike any character you’ve read before. This is storytelling at its finest, and will sit with you long after you’ve turned the final page.” ~Bestselling Author Emerald O’Brien

Poppy Pratt was a teenager when she watched her father murder her boyfriend. Only a child when she made the call that would put her dad away for the rest of his life. She watched the sheriff lead him off, her father still laughing at the Alabama moon, his arms slick with Shawn’s blood.

Eighteen years later, Poppy is a chiropractor with a thriving practice and a house in the Vermont suburbs. She even goes on the occasional date. So, when a mysterious stranger shows up at her house claiming that her father is stalking him, Poppy blows him off. Her dad is in jail—psychopath or not, he’s no threat. And though this man is writing a book about her dad, she can see no reason for anyone to go after him.

But then Poppy receives an unmarked package, and her carefully constructed world begins to crumble. A severed ear would throw most anyone off their game. The stranger was right—it might not be her dad, but someone is watching, and they’re after Poppy, too. Could it be an angry family member of one of her father’s victims? An obsessed serial killer fan? But even when Poppy’s new author friend is viciously attacked, she can’t call the police. Shawn wasn’t her father’s only victim, and her stalker clearly knows enough to implicate her in her father’s crimes.

It seems she’s destined to go down the same way her father did—with her hands covered in blood. The only question is whether she’ll be the one holding the knife.

Skillful, addictive, and crackling with nerve-fraying tension, Deadly Words is a thrilling joyride straight into hell. And O’Flynn ensures that you’ll never want to leave. If you like Gillian Flynn and Carolyn Kepnes, you’ll love the Born Bad series.

“Brilliant, dark, and impossible to put down. O’Flynn masterfully crafts a twisted tale of buried secrets in Deadly Words. Poppy is unforgettable—unlike any character you’ve read before. This is storytelling at its finest, and will sit with you long after you’ve turned the final page. Get this on your must-read list now!”
~Bestselling Author Emerald O’Brien

“Genius—no thriller lover should miss the irrevocable madness of Poppy Pratt. Read this one with more than just the nightstand light on.”
~Author KR Stanfield