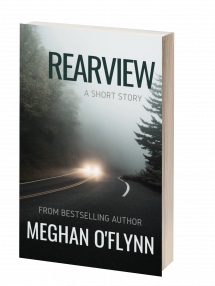 “Sharp and introspective, ‘Rearview’ is an eerie and unsettling tale with a shocking conclusion that remains long after this short story is finished.”
~Bestselling author Emerald O’Brien

What is there to lose when all you have is the past?

For twenty years, Harold has watched his high-school sweetheart from the confines of his car, unbeknownst to her, to her husband, to her family. The dogs don’t like him, but no one believes them.

But though the past cannot be reclaimed, Harold can’t seem to stop. And hopelessness is enough to make any man feel trapped—his car has become his cage.

Engrossing, thought-provoking, and poignant, “Rearview” from bestselling author Meghan O’Flynn will suck you in from page one. If you like short stories by Blake Crouch, Joe Hill, and Gillian Flynn, you’ll love “Rearview.”