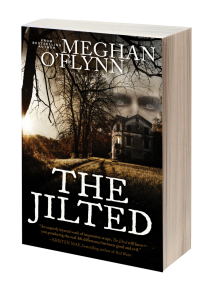 “An expertly layered work of impressive scope, The Jilted will leave you pondering the real-life differences between good and evil.” ~Kristen Mae, bestselling author of Red Water

A violent history lurks beneath the white-washed facade of Cicatrice, Louisiana. And that evil is waking up.

It’s been two weeks since Chloe Anderson’s fiancé, Victor, disappeared with his daughter, and each night since, Chloe has awakened from the same horrible dream. She’s convinced the nightmares are trying to tell her something, especially when she finds Victor’s camera at an old antique shop downtown—a place where the shadows of the past roam the cobbled streets.

Chloe takes a job at the shop, hoping Victor will return for his prized possession. But when she’s sent to do an antiques appraisal on the outskirts of New Orleans, she feels the energy of the sprawling plantation like an icy hand on her back, drawing her away from the shop—and sucking her in. Perhaps it’s the plantation’s mysterious owner triggering her long-dormant intuition. But intuition doesn’t explain the terrifying visions that now plague her waking hours, or the mutilated girl who stalks her from the shadows, vanishing when Chloe tries to speak to her. And the voices…

Come to me.
Watch out for the dark, child.

Is this what Victor meant when he told her he’d felt possessed? Is she losing her mind the way he did?

Now Chloe must look deep within herself, summoning a power she’s tamped down since childhood, because the thing that took Victor is an old, vicious darkness, far more ancient than the horrors that seep from every branch on the white-washed plantation—more appalling than the hideous acts of violence that lurk in each long-abandoned cemetery. And if she cannot defeat the evil, if she succumbs to the madness, the creature stalking the town will take Victor, take Chloe…and make sure no one leaves Cicatrice alive.

For fans of Stephen King, Nick Cutter, and Thomas Heuvelt, this breathtaking supernatural thriller is a masterfully crafted novel about what horrors might exist on the other side—whether we believe they are there or not.

“In this haunting, atmospheric Southern Gothic paranormal thriller set in New Orleans, where ghosts loom larger than life, a young woman’s connection to the afterlife draws us into relentless suspense that leaves us questioning every element of reality. Full of twists and turns, The Jilted leaves the reader breathless to the very end.”
~Wendy Heard, Hunting Annabelle

“I love horror and [O’Flynn’s] story crafting is as good as it gets. This story really got under my skin! INTENSE creepy factor, multi-layered, supernatural horror. Brought me back to the days when I’d stay up till the wee hours of the morning reading Stephen King novels.”
~Beth Teliho, award-winning author of Order of Seven

“Heart-stopping twists and turns, answers to your burning questions hiding in plain sight, yet you can’t see them because O’Flynn once again writes in such a way that makes you question everything. In short…brilliance.”
-Mike Cruise, Papa Does Preach

“The creepy horrors that come from Meghan O’Flynn’s twisted mind create an intriguing tale that sends the reader on a thought-provoking journey. I love her take on the world of ghosts and demons, and would recommend this book to anyone who enjoys Stephen King.“
-Chrissy Woj, Quirky Chrissy

“Meghan O’Flynn has this way of writing that makes you forget yourself…a delightfully confusing and panicky read as she mindf*cks you page after page. There were at least 5 different times where I was absolutely sure I knew how it would end…NOPE.”
-Louise Treadwell, InfoSciGeek